My torrid affair with computers

In my last year at Glasgow University - in the early seventies - I needed another course to finish off my (very ordinary) degree.  So I took computing.  We learned to program using Algol, typing our programs on punch-card machines and getting them back after twenty four hours with a fail because of a syntax error.  I enjoyed the course and found it straightforward.  I even tried to get a job as a programmer, and feel lucky that I failed to get them: I'm rubbish at interviews.

Then, while teaching a few years later, there was a mini-computer, owned by Grampian Region, which could be taken round schools on a rota.  I remember picking it up from Buckie High School in my Fiat 127; the computer was in various wooden boxes, and filled my car.  I set it up at home in order to try it out, and fell in love with it.  I wanted my own computer!

At school, a year or so later, I managed to persuade the headteacher to invest in an Apple II with a Sony colour monitor.  Later on we progressed to floppy drives.  I learned about the machine along with my pupils, including a couple of very keen and gifted sixth years (whose legacy lives on in Digital Investigations and beyond).  We bought another Apple II.  Then we got an Acorn Atom.  And finally a room full of BBC Micros, running on an Econet, with a 10Mb hard drive as a server.  (Yes, 10 megabytes.)  I bought my own BBC Micro, and wrote a novel with in.  Later I moved on to an Archimedes.

The hobbyist nature of computers died for me in the mid-nineties when I bought an IBM clone, largely because the OU course I tutored required it.  I no longer knew what went on under the hood.  The World Wide Web was fantastic - I got an email address somewhere in the early nineties, and was amazed at the speed on my 56K dial-up modem.  But there were viruses, Australian lottery wins, and mysterious Kenyans who wanted to leave me their money.

Ten years later, with the rise of social media, it became fun as well as being purposeful again.  I got back in touch with people I hadn't seen for thirty years.

And then the Raspberry Pi emerged, with its bloodline back to that Acorn Atom, and I knew I wanted one.  I quickly acquired three, along with add-on boards and a packet of electrical components.  I've got five now. Or maybe six. And Arduinos. I'm able to turn on LEDs using a computer.  I've taken time-lapse movies of the back garden.  I may one day make something useful.  It's fun again! 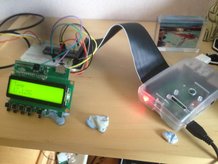 Raspberry Pi B+ with display. It measures temperature and gives a day-by-day countdown to the next family event. 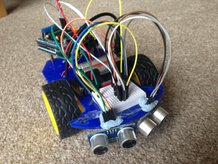 Robot controlled by and Arduino with a motor shield. Awaiting a chance to alter the program to use the two distance sensors - one just isn't enough!

Very much inspired by FutureLearn's (free) short course on robotics.